CrimeWorld by John Rogers in Fate Worlds Volume Two: Worlds in Shadow provides an excellent rundown on how to run criminal exploits using Fate. This article presents an alternative for breaking into a low technology facility, focusing on a set of extensions to the challenge rules (page 147 in Fate Core). These mechanics simulate the sort of exploits made popular by video games like Thief and Assassin’s Creed.

The first step in creating a scenario is to come up with details for the House. The House is the target of the illicit activities. It could be the king’s secret vaults or the tower of a reclusive wizard. The GM should think up a few interesting details about the House, including what physical security and access restrictions are present. Avoid creating a map, as that will be done collaboratively (see “The Heist”).

The House has one skill, Security, reflecting how difficult it is to break into the target. This value uses the same scale as Fate skills. A target with Good Security (+3) might be the manor of a rural duke, while Epic Security (+7) is appropriate for the king’s prized emerald. If the Security level is higher than the characters’ peak skill, it’s going to be difficult for them to succeed.

After creating the House, it’s time to make some guards to watch over the place. A mage might use imps or zombies to guard his books of magical lore, while a king or mayor might employ more mundane defenses.

Guards are similar to mobs (page 216 in Fate Core), with a skill cap equal to the Security of the House. The best skills for guards are Fight and Athletics to defend themselves with as well as Notice and Empathy to detect intruders. If you want to push the action toward stealth and fast talking, give the guards higher Fight and Athletics skills; the player characters will want to avoid overt aggression because it will be much riskier.

Guards have one minor consequence instead of a stress track. In isolation, guards are fairly weak and pretty easy to ambush. However, there’s an infinite supply of guards, so taking one out is essentially just an effective, although risky, way to buy time. Finally, give the guards a couple aspects, such as Enthusiastic About Inflicting Pain or “Is It Lunchtime Yet?”.

During play, the players don their black hats and case the House. This involves uncovering some of the details already in place. What is the ruby locked up in? Who has access to the king’s chambers? These questions can be answered using simple skill rolls.

As befits Fate, this can be a collaborative effort. If a player has a good idea when asking a question about the mission, it’s fine to run with it, even—maybe especially—if it’s a somewhat surprising development!

In order to play through the mission, some note cards and tokens to represent characters and guards are necessary.

After the players have gathered details about the House, they have to create the plan for the heist. This is a series of specific tasks that must be overcome in order to succeed. If all the tasks are completed, and the characters can get out without being detected, they are successful! Create one task for each player in the game.

Tasks can be contingent on each other, or some can be performed simultaneously. Be careful, though, that no part of the plan is optional for success. Here are some possible tasks:

Above the description of the task, write a location where this task will take place, similar to labeling zones in a conflict (“Main Office: Distract Baron von Schlefwitz”). Each of these tasks gets an opposition value that’s revealed when a character enters the zone on which it’s placed (see “Character Actions: Movement”).

Gather together the task note cards, and add note cards equal to the number of players, resulting in twice as many note cards as players. These are your zones.

First, place the note card containing the final task on the table. The GM and players alternate placing the remaining note cards adjacent to one or more of the existing note cards, thus creating a map of zones. Label the blank zone cards with evocative names reflecting places within the House such as Main Hall or Barracks.

A number of zones equal to half the number of players rounded down have alarms. Add labels to those cards such as “Alarm Bell” or “Summoning Circle.” Put the alarms on zones that don’t already have a task. Finally, add a zone for “Outside the House” and place it adjacent to one or more zones that make sense.

Place all the characters in the “Outside the House” zone. Place guards equal to half the number of players (round down) on zones of the GM’s choice. Place each guard near one of the edges of the notecard. 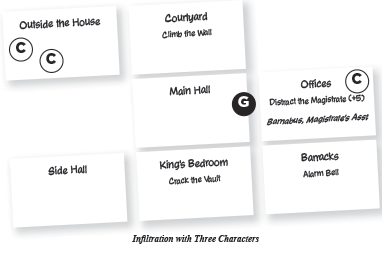 Characters have the usual actions, with others listed below. If a PC fails any action while guards are in the same zone as the character, the guards in the zone are alerted—they get the Alerted! aspect which, unlike most aspects, has two free invokes.

Movement works the same as it does in Conflicts (page 169 in Fate Core). When a character moves into a zone that contains a task, determine the opposition value by rolling Security for the House. Write this result next to the task.

As an overcome action, use a thematically appropriate skill to complete a task in the same zone.

If the roll is failed, the character takes stress equal to the roll’s difference. Whether this is physical or mental stress depends on the task attempted; consequences taken should be appropriate to the task.

Furthermore, a failed or tied roll to overcome a task results in the nearest guard becoming suspicious. Give the guard the Suspicious aspect with one free invoke. If guards are in the same zone, they become alerted instead.

Characters may attempt to remove the Suspicious and Alerted! aspects using an overcome action opposed by the guards. Failing to remove suspicion causes the guard to become alerted.

Guards who are physically attacked become alerted, if they weren’t already. Guards who are killed need to be disposed of in some fashion, as guards who stumble upon a body are immediately alerted.

Guards patrol each turn by moving one—and only one—zone, heading in one direction, moving through adjacent zones, until they must turn around and head back in the other direction. Use the edges of the note cards to remember which direction the guards are moving.

Only alerted guards may attack.

Each turn, if there are fewer guards in the House than the number of players, the Security of the House may be used to gain more guards. Roll Security against an opposition of five. On a success or tie, one guard may be placed on the edge of a note card anywhere within the House. Since you start the heist with half as many guards as players, the GM can summon guards on most turns at the beginning.

If the alarm has been sounded, don’t roll. Instead, place one guard, ignoring the limit for the number of players.

Characters may use Burglary to disable an alarm, thus making it more difficult to sound the alarm. If successful, remove the alarm label. The opposition is equal to the Security of the House.

Leading up to the heist, characters may create an advantage (maybe using Rapport to get a job within the House) that gives them authority to be in one or two of the zones. Guards can’t actively target the character in such zones.

Deceive or some other reasonable skill can be used to hide a guard’s body so it isn’t found.

So, you’re not going to overcome all the tasks and get out again? It’s fine to offer up concessions as in a Conflict (page 167 Fate Core). A particularly good one is to let someone get captured in exchange for other characters escaping. Time to infiltrate the jail!