GMs and players, you should talk briefly before you start a conflict about the circumstances of the scene. This mainly involves coming up with quick answers to variations of the four W-questions, such as:

You don’t need an exhaustive amount of detail here, like precise measures of distance or anything like that. Just resolve enough to make it clear for everyone what’s going on.

GMs, you’re going to take this information and create situation aspects to help further define the arena of conflict.

Landon, Zird, and Cynere are breaking into a dockside warehouse in order to find smuggled goods on behalf of their latest employer. Unfortunately, someone tipped the smuggler off. Now Og, one of his thug lieutenants, is at the warehouse waiting for them to show up, and he brought along four friends.

The participants in the conflict are pretty obvious—the PCs, plus Og and four nameless enforcers, all NPCs under Amanda’s control. The warehouse is the environment, and the group takes a moment to talk about it—boxes and crates everywhere, large and open, there’s probably a second floor, and Amanda mentions the loading door is open because they’re waiting for a ship to come in.

GMs, when you’re setting the scene, keep an eye out for fun-sounding features of the environment to make into situation aspects, especially if you think someone might be able to take advantage of them in an interesting way in a conflict. Don’t overload it—find three to five evocative things about your conflict location and make them into aspects.

Good options for situation aspects include:

In a mental conflict, it might not always make sense to use situation aspects and zones to describe a physical space. It’d make sense in an interrogation, for example, where the physical features of the space create fear, but not in a really violent argument with a loved one. Also, when people are trying to hurt each other emotionally, usually they’re using their target’s own weaknesses against them—in other words, their own aspects.

So, you may not even need situation aspects or zones for a lot of mental conflicts. Don’t feel obligated to include them.

Considering our warehouse again, Amanda thinks about what might make good situation aspects.

She decides that there are enough crates in here to make free movement a potential problem, so she picks Heavy Crates and Cramped as aspects. The loading door is open, which means that there’s a large dock with water in it, so she also picks Open to the Water as a situation aspect, figuring that someone might try to knock someone in.

As the scene unfolds, players might suggest features of the environment that are perfect as aspects. If the GM described the scene as being poorly lit, a player should be able to invoke the Shadows to help on a Stealth roll even if she hadn’t previously established it as an aspect. If the feature would require some intervention on the part of the characters in the scene to become aspect-worthy, then that’s the purview of the create an advantage action. Usually the barn doesn’t catch On Fire! without someone kicking over the lantern. Usually.

GMs, if your conflict takes place over a large area, you may want to break it down into zones for easier reference.

A zone is an abstract representation of physical space. The best definition of a zone is that it’s close enough that you can interact directly with someone (in other words, walk up to and punch them in the face).

Generally speaking, a conflict should rarely involve more than a handful of zones. Two to four is probably sufficient, save for really big conflicts. This isn’t a miniatures board game—zones should give a tactile sense of the environment, but at the point where you need something more than a cocktail napkin to lay it out, you’re getting too complicated.

When you’re setting up your zones, note any situation aspects that could make moving between those zones problematic. They’ll be important later, when people want to move from zone to zone. If that means you need more situation aspects, add them now.

Amanda decides the warehouse needs to be multiple zones. The main floor is big enough, in her mind, for two zones, and the Heavy Crates she mentioned earlier make it hard to freely move between them.

She knows there’s also a second floor ringing the inner walls, so she makes that an additional zone. She adds Ladder Access Only to the scene.

If, for some reason, someone decides to run outside, she figures that can be a fourth zone, but she doesn’t think she needs any aspects for it.

She sketches the rough map on an index card for everyone to see. 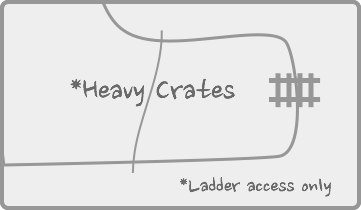