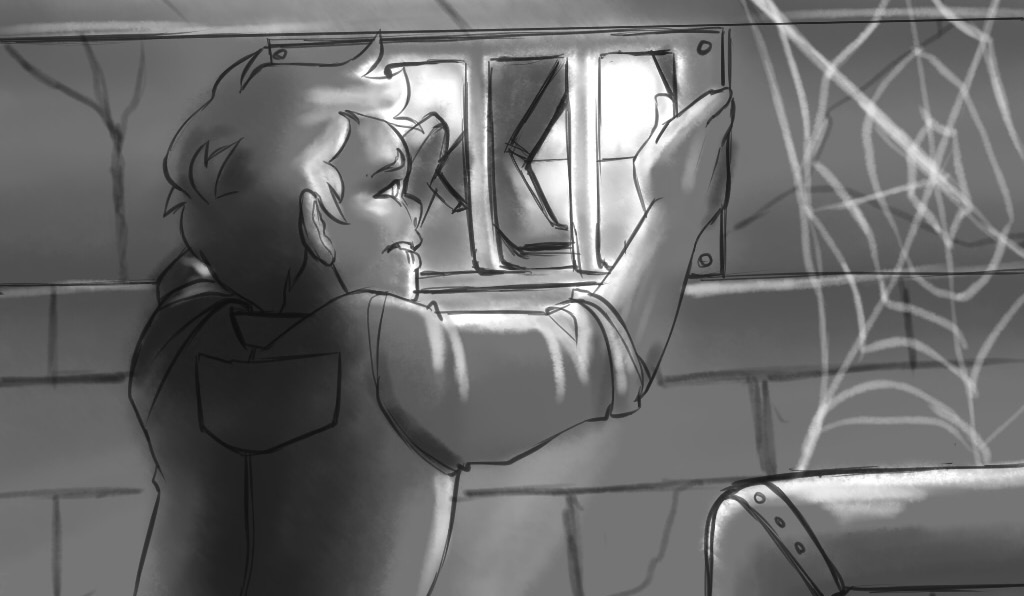 Fate conflicts sometimes have a tendency to run a little long. At first, conflicts are exciting and thrilling—filled with gun-toting dinosaurs and two-fisted pulp heroes—but when battles turn into slogs to see who can fill their opponent’s stress track first, Fate conflicts lose a lot of their punch. How can we ensure they stay fresh and interesting?

This piece discusses how to use a conflict countdown, a system to ensure that your Fate conflicts never bog down and always remain punchy, surprising, and interesting.

When a conflict of any kind begins, set up three different stress tracks of two boxes each to pace the fight. Together, these three stress tracks are the conflict countdown. Each box is worth one stress: when the stress track is hit for 1-stress, mark one box. Each stress track leads to a twist.

Each time you fill both stress boxes on any one of these three tracks in your conflict countdown, create a twist at the start of the next round of the conflict.

If every box of the conflict countdown is full when the countdown takes another 1-stress hit, the battle ends in a shake-up (see below).

A twist is a change to the circumstances of the conflict, something that complicates, expands, or redirects the stakes of the battle. Twists make the conflicts ever-changing and interesting, but they shouldn’t give an advantage to the opposition or punish the players. Instead, they keep the story moving whenever conflicts start to bog down.

The first step to introducing a twist is to understand the stakes of the conflict. What does each side really want? What does “victory” look like? The two sides in a conflict may have more nuanced goals than “punch the other guy until he falls down,” but often the goals in physical conflicts—“subdue the opposition”—and emotional conflicts—“get the opposition to do __”—are fairly straightforward.

Sometimes the stakes of the conflict are different for each side. In a physical conflict, for example, one side might have the goal of subduing the opposition, while the other has the goal of simply escaping.

Once you know what the stakes are at the start of the conflict, you can introduce a twist to expand on those stakes. Think of this as adding another clause to the existing stakes.

If the stakes of a fight between a gang of criminals and a group of security guards are—on both sides—“subdue the opposition,” then a good twist would add the clause, “before the bomb goes off” or “while being filmed by a news crew.” The twist doesn’t make things easier for the criminals or the guards, but it does heighten the tension for both sides.

Most twists fall into one of three categories: complications, expansions, and redirections. Here are a few notes about each:

When you complicate the conflict with a twist, you add some factor that makes it more difficult for both sides to achieve their aim in the conflict. Don’t give either side an advantage over the other!

Bad complication: One side of the conflict—the prisoners—just wants to escape from prison, while the other side—the prison guards—wants to subdue the escapees. When the countdown hits a twist, the GM says, “The prison’s security systems shut down, and all the doors swing open!” Huge disadvantage for the guards!

Good complication: In the same situation, the GM says, “Someone upstairs flipped open the rest of the prison cells, but not the exits, and all the other prisoners surge out and a riot starts!” Both sides are hindered, as the escapees have to navigate the riot while the guards have plenty of other prisoners to deal with.

Bad expansion: In the prison escape attempt, the conflict countdown hits another twist. The GM says, “More guards come streaming in from other parts of the prison!” That’s not actually expanding the conflict at all; it’s just adding more guys to one side of the fight.

Good expansion: In the same situation, the GM says, “There’s an explosion above you, and then black-clad assassins holding automatic weaponry come down through the ceiling, rappelling down ropes!” The assassins want to kill one of the escapees, and will stop at nothing to do so. The assassins and the guards won’t be acting in concert at all, and it certainly adds complications to the escapees’ attempt to get out of the prison.

Expanding the Conflict and NPC vs NPC Action

If you add a new side to the conflict, it might appear that there are three sides at work: two factions of NPCs and one set of PCs. It might make sense fictionally for the NPCs to fight against each other, but who wants to watch that? If NPCs try to harm each other, have the side with the higher skill level automatically inflict stress equal to the difference in skill levels to the other side.

When you redirect the conflict with a twist, you change the stakes of the conflict for both sides. You alter the situation, so what used to matter is no longer the primary focus.

Bad redirection: The conflict countdown for the prison escape hits another twist. This time, the GM says, “Noxious gas starts pouring into the room from the air ducts and from the other corridors! Everybody who breathes it starts choking!” Not only does this twist seem not to fit fictionally with the situation, it also doesn’t change the stakes for one side of the conflict. The guards may switch their stakes from subduing the escapees to simply surviving, but the escapees already wanted to get out. Now, they just want to get out even more. Their stakes haven’t actually changed.

Good redirection: In the same situation, the GM instead says, “It turns out that there’s a camera crew here, filming some kind of documentary or news report. They come rushing in to catch all the action on film!” The guards now have to be worried about their actions being filmed—if they show too much brutality, they might be in greater trouble than otherwise. The escapees, on the other hand, might be able to get their story out to the outside world, explaining their innocence—or they might have to worry about their guilt in the eye of the public, deciding whether it’s okay to do whatever it takes to escape while the cameras are rolling.

When you introduce your twist, introduce the new NPCs or new scene aspects you need to make it real. If any of the twists can work as a compel on one of the PCs’ aspects or on an existing scene aspect—a great sign of a good twist—the PCs still get their fate points as normal for compels. If a PC refuses a compel based on a twist, don’t charge them a fate point; choose a different twist instead.

A shake-up is a major change to the circumstances of the conflict, like a twist but amplified. A shake-up always ends the prior conflict entirely, but often leads directly into another conflict.

At the same time, shake-ups generally don’t end a scene or allow PCs or NPCs to clear their stress. When a shake-up leads directly into a new conflict with its own conflict countdown, the consequences and stress from the prior conflict don’t go away.

When you introduce a shake-up, build on the circumstances already established to substantially change the environment, the stakes, or the parties in the conflict. Don’t introduce a completely random new element from nowhere just to make a shake-up happen; there’s a fine line between interesting and random.

Bad shake-up: The conflict countdown hits a shake-up, and the GM says, “The escapees manage to get outside to the courtyard, where they meet a more heavily armed group of guards standing between them and the exit.” Not only does this not substantially change the situation, the exact same skills would be useful—the guards will try to pound on the escapees using Fight or Shoot, and the escapees will probably respond in kind.

Good shake-up: In the same situation, the GM says, “The escapees lose the guards in the open areas of the prison and jump into the vents, but the guards saw them go.” What used to be a running fight, full of punching and tackling, is now a cat and mouse game between the prisoners trying to find their way out of the labyrinthine vents and the guards hunting them down. It may not be a normal conflict anymore, but that’s just fine.

You can ask yourself if a shake-up has truly occurred by asking if the same skills are still applicable. If no side in a conflict has to change their tactics in a meaningful way, then there hasn’t been a shake-up! In the above example, any side that was planning on using Fight to resolve the conflict is now going to have to rely on Athletics and Stealth.

The conflict countdown is all about making conflicts as punchy, flashy, interesting, and exciting as possible. If the countdown becomes just another thing you have to track in a conflict because you’re already invested in the action, then drop it. It’s not necessary in situations where everybody’s leaning forward in rapt attention because this is the final fight between the lost prince and his evil father. This is for those other fights, when you’re up against the evil father’s imperial guardsmen. The conflict countdown will make those fights more exciting and surprising, while also ensuring that they don’t overstay their welcome.

I hope you enjoy using the conflict countdown to add some zest to your conflicts!